Market Returns: Global stocks generated losses in 2018 as the year was marked by bookend spikes in volatility in both the first and last quarters. Interestingly, the drivers of what caused prices to drop in the first quarter contrasted with the concerns which led to recent stock performance weakness. Leading off the year, investors were worried about inflation. With the real fed funds rate in negative territory at the time, investors believed that the Fed would have little choice but to raise interest rates and tighten financial conditions which could have slowed the economy. Fast forward to this past quarter and the concern was no longer inflation but instead slowing global growth and the potential impact from a U.S./China trade war. As the Fed continued to raise interest rates with the fourth rate rise in 2018 coming in December, concern grew that continued Fed tightening may set off a recession. The rank order of performance for stocks in the fourth quarter was the opposite of how stocks performed for the year, as U.S. stocks fell the most in the quarter while falling the least for the year as compared to developed non-U.S. and emerging market equities. 2018 was also a rare year when portfolio diversification didn’t help to avoid loss as most major asset classes either produced negative returns (as was the case for global stocks) or were flat (as was the case for U.S. bonds); in fact, cash actually outperformed both last year with mildly positive returns. U.S. bonds had produced negative returns for most of the year and only managed to eke out a 0.01% calendar year return in the year’s final trading day. Global bonds generated mild losses last year as an appreciating U.S. Dollar presented currency-related headwinds.

U.S. Economy: As suggested by the uptick in stock price volatility, investor concern grew in the latter part of 2018 that the U.S. economy may be closer to the end of what has been a historically long bull market for stocks. As we outlined in our most recent piece detailing the drivers for recent market volatility, uncertainty around trade, interest rates, Brexit, and other issues converged in 2018’s latter half. While investors are still dealing with these issues to varying degrees, economic conditions in the U.S. are of lesser concern. For example:

As for the risk of a recession, conditions which historically precede recessions (such as “price bubbles” in housing, or problems in business spending and inventories) also appear to not be present. In summary, while issues stemming from geopolitics, trade, etc., are out there, fundamentals for the U.S. economy are decent which can provide an opportunity for continued positive growth in corporate earnings and potential upside for U.S. equities in 2019.

U.S. Stock Valuations: The recent sell-off in stocks, in combination with the U.S. economy’s solid footing, has actually made U.S. stocks more attractive from a valuation standpoint. The S&P 500 Index’s forward 12-month price-to-earnings multiple was 14.4 as of December 31, 2018 which is below its 25-year average indicating that U.S. stocks are selling at a discount to historical valuations. As this multiple is forward looking, it already factors in an expected drop in earnings growth in 2019 as last year’s eye-popping mid-20% earnings growth rate was largely spurred by the drop in the corporate tax rate, which is a one-time event. The exhibit to the right depicts that while valuations are less predictive of future returns in the short run (left pane), there has been a stronger association with lower valuations and higher returns over longer time periods, shown below. 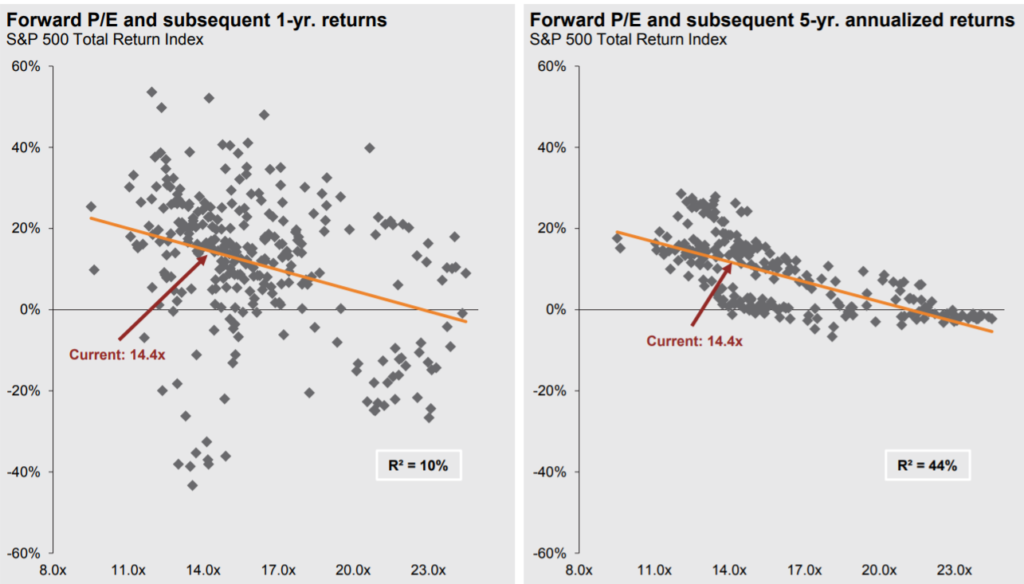 International Markets: Adding to recent volatility were investor concerns around slowing global growth. The trade impasse between the U.S. and China has contributed to a slowdown in China’s economy while also adding a drag on other emerging market economies given their sensitivity to global trade. Europe’s economies have also slowed as uncertainty regarding Brexit as well as other issues has led to a softening in certain leading economic indicators. As of this writing, the U.S. and China have narrowed on terms through ongoing trade negotiations which can suggest an increased possibility of resolution. If this were to be the case, international stocks look attractive as they are trading below historical long-term valuations as depicted by the exhibit to the left. While U.S. stocks remain our largest exposure within equities, we believe in maintaining a globally diversified portfolio and see the possibility of a recovery in non-U.S. stocks if trade and other issues can be resolved. 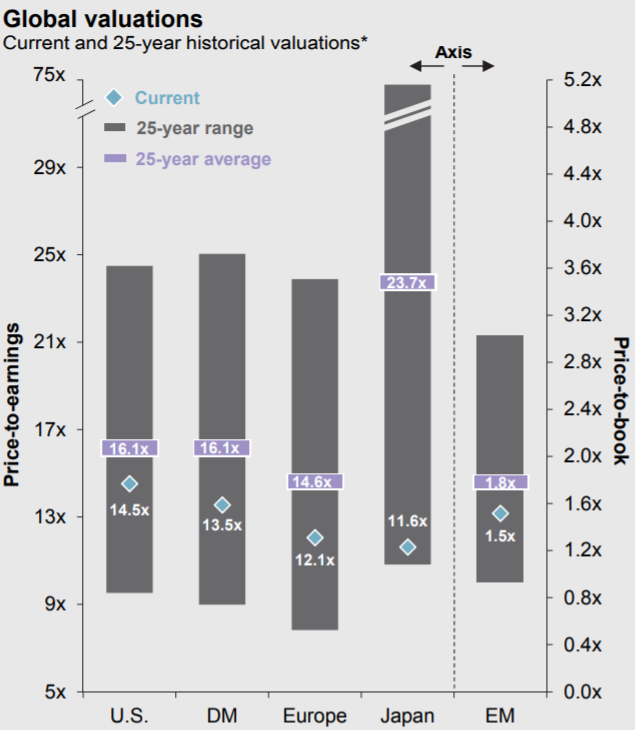 Source: FactSet, MSCI, Standard & Poor’s, Thomson Reuters, J.P. Morgan Asset Management.
*Valuations refer to NTMA P/E for Europe, U.S., Japan and developed markets and P/B for emerging markets. Valuation and earnings charts use MSCI indices for all regions/countries, except for the U.S., which is the S&P 500. All indices use IBES aggregate earnings estimates, which may differ from earnings estimates used elsewhere in the book. MSCI Europe includes the eurozone as well as countries not in the currency bloc, such as Norway, Sweden, Switzerland and the UK (which collectively make up 47% of the overall index). Past performance is not a reliable indicator of current and future results.
Guide to the Markets – U.S. Data are as of December 31, 2018.

Bonds and Interest Rates: The Fed lifted the funds rate four times last year which provided grounds for worry among investors that the Fed may have been too aggressive in its pace of raising rates. The yield curve responded by flattening in 2018, which has produced narrow yield spreads between longer and shorter-dated maturities. A flattening yield curve can be a negative signal suggesting lower long-term future economic growth, so we will be watching the shape of the yield curve closely. Fed Chair Jerome Powell has indicated that the Fed may now be closer to its neutral rate of interest – a rate which maintains full employment and low inflation – which could suggest a pause in the Fed’s path to further rate hikes. This, in combination with higher yields on shorter-dated maturities, makes high quality bonds more attractive as an investment, especially as they also can provide a hedge against equity risk, helping to blunt the effects from stock volatility in a portfolio.

Conclusion: The global economy is likely to slow in 2019, but this does not preclude stocks from generating positive returns this year. While GDP growth is slowing, earnings growth looks to continue to remain positive and valuations are the most attractive they have been in some time. Volatility is likely back to being more in line with the market’s long-term average as it had been quite low leading up to 2018. Resolution to some of the outstanding issues, particularly regarding trade, may likely help to calm investors as well as markets. We will continue to monitor the global markets and asset classes and provide updates while making any portfolio adjustments as deemed prudent.