Market Returns: Global stocks finished the year on a strong note as global economic growth was the broadest across countries in a decade.  U.S. stocks gained 22% on the possibility and eventual passing of tax reform (which included a drop in U.S. corporate tax rates from 35% to 21%, thereby helping to increase future profits), along with higher economic growth and a continued downtrend in unemployment.  Non-U.S. stocks outgained U.S. stocks in 2017, with European stocks bolstered by the election results in France and The Netherlands that lent strong support for the continuation of the European Union.  Returns for both developed international and emerging market stocks were also buoyed by improved economic data and attractive relative valuations as compared to those for U.S. stocks.   Emerging market stocks generated over 37% returns last year as technology stock prices surged, particularly Chinese Internet shares.  In spite of three Fed interest rate increases in 2017, U.S. bonds gained as longer-dated bonds rallied throughout the year, while those same interest rate increases helped to modestly increase returns on cash.

U.S. Market Environment:  The economic environment in the U.S. is still favorable for stocks, even as we approach completing the ninth year of the stock market’s expansion since the trough reached in March 2009.  GDP growth increased in 2017, and the new tax reforms signed into law last month are expected to help enhance corporate profits and may lead to increased spending on capital investments while potentially boosting consumer spending.  This combined impact may help lift GDP growth above 3% in 2018 from its year-over-year gain of 2.3% reached in the third quarter of 2017.  While inflation has been muted even as the unemployment rate reached an almost 20-year low, continued labor market tightening may begin to apply upward pressure on wages.  If inflation picks up the Fed may need to increase the pace of interest rate hikes, which could slow the economy.  While inflation expectations have been quite low, the possibility for an uptick in this measure is now higher than before. 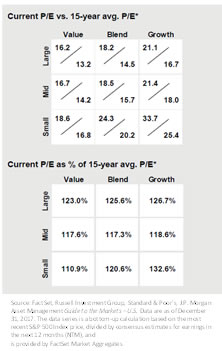 U.S. Stock Valuations:  Despite the solid near-term economic environment for U.S. stocks, stock valuations are above long-term averages.  The exhibit to the right shows recent price-to-earnings ratios for U.S. stocks across large-, mid-, and small-cap companies as well as across the value, core, and growth styles which are all trading above their 15-year averages.  As we have written in the past on this topic, while stocks can continue to perform well with higher valuations, earnings growth would need to pick up to fully justify these valuation levels.  While corporate earnings should receive a lift from lower taxes and an uptick in U.S. GDP growth in 2018, the outlook for U.S. GDP growth beyond 2018 is less sanguine, which is likely to provide a headwind for U.S. stock returns beyond 2018.

International Markets: As noted in the lower exhibit, in comparison to U.S. stocks, both developed international and emerging market stocks carry relatively attractive valuations even after the strong 2018 results.  Economic indicators such as the global purchasing managers’ index reaching multi-year highs, and global central bank reflation efforts, indicate the economic underpinnings are in place for international stocks to continue to perform well.  While U.S. stocks remain our largest exposure within equities, we believe in the benefits of maintaining a globally diversified portfolio and see more upside opportunity in non-U.S. stocks.

Bonds: The Fed forecasts three interest rate increases in 2018, which in our opinion seems plausible given the favorable economic environment expected this year.  While rising interest rates can be a headwind for longer-dated bond prices, the opposite was true in 2017 as the yield curve flattened, leading to longer-dated bonds outperforming shorter-dated bonds.  A flattening yield curve can be a negative signal suggesting lower long-term future economic growth, so we will be watching the shape of the yield curve closely.  We will continue to allocate a portion of our portfolio to alternative investments, which provide some hedge against stock market risk but may generate better returns than bonds.  If the Fed delivers on multiple future rate increases, yields on high quality bonds could start to become attractive for the first time in years. 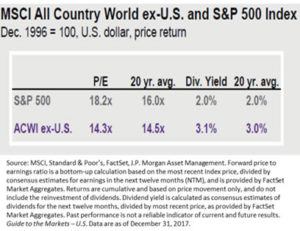 Conclusion: The global economy continues to grow, leading to a good environment for stocks in 2018, though increasing valuations may provide a headwind for future returns.  Additionally, the stimulus from reduced taxes and higher deficits should add to economic growth, though longer-term impacts are far more debatable.  Stock volatility last year was incredibly low and we expect this to normalize in 2018.  As always, we will continue to monitor the global markets and asset classes, and make adjustments if deemed necessary through our research.

We appreciate your continued trust in us, look forward to working with you in 2018, and wish you a Joyful New Year!

(Your 4Q17 and trailing periods personal account performance is reflected on your quarterly performance report, a version of which your advisor will review with you during your next portfolio or annual planning meeting.)