Market Returns: Global equity markets posted strong gains in the third quarter, coinciding with loosening economic restrictions around the world as many countries experienced improvements in case counts and fatalities from COVID-19. September saw a spike in stock price volatility, however, due to a combination of worsening virus case counts in Europe and the U.S., as well as the lack of progress on extending government stimulus here at home. While July and August saw a continuation of growth style leadership from the year’s first half, September saw a reversal of this trend as stocks trading at lower valuations held up better in the down month. Developed international stocks posted more modest gains in the third quarter compared to those for the U.S., while emerging market stocks outperformed as virus mitigation efforts by Asian countries allowed for a more rapid reopening of their economies. Bonds also gained last quarter with foreign bonds outperforming U.S. bonds, at least partly due to a weaker U.S. Dollar as interest rate differentials between the U.S. and foreign developed markets reached multi-year lows. Cash generated marginally positive returns due to the federal funds rate being near zero.

COVID-19 Update: As of October 8, 2020, the number of global cases of COVID-19 exceeded 36.7 million with over 27.6 million recoveries and over 1.1 million deaths. [1] Comparing data across countries and regions is challenging since testing initiatives vary widely across countries and regions, which distorts comparisons. For example, Europe appears to have suffered a massive increase in cases over the summer while the U.S. has seen a decline. However, Europe has done a far better job at both testing and contact tracing than the U.S. during this period, which may mean the true case count for the U.S. has been understated. Based on available data, North Asia (Japan, South Korea, China, Hong Kong and Taiwan) has kept case counts and fatalities at comparatively low levels. The relative containment of the virus in these countries has led to faster and more sustained economic reopenings than the western economies, which in turn has translated to recent stock outperformance that benefited our global diversified portfolios. 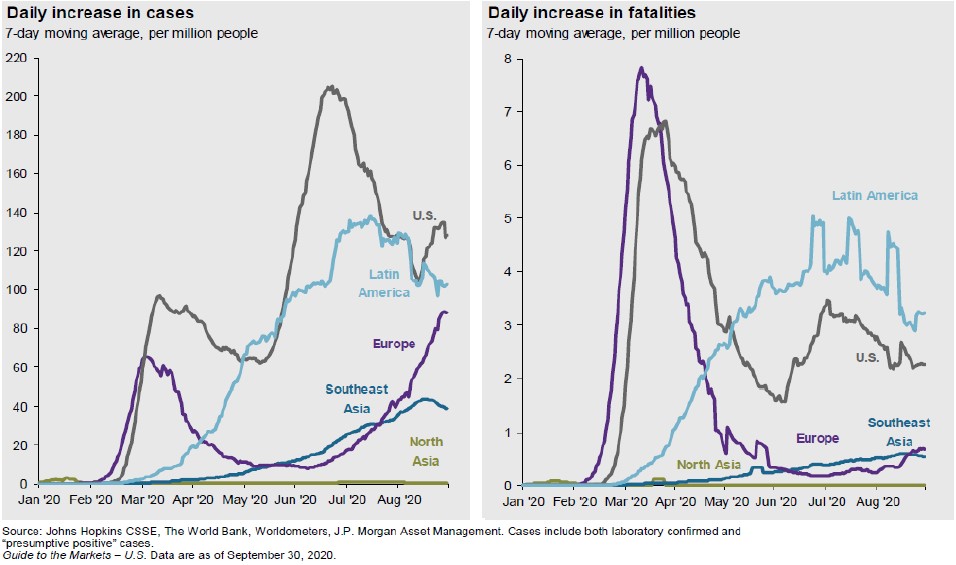 Fatalities from COVID-19 have improved in the U.S., which is likely a reflection of improved therapies in treating the virus, increased use of masks, and increased cases across lower risk groups such as younger people. With 11 vaccines that are in phase 3 clinical trials globally, experts such as Dr. Robert Redfield (Director of the CDC) believe a vaccine could be available “sometime between November or December, but (in) very limited supply”. Redfield believes that widespread distribution to the American public would be later, “…probably looking at late second quarter, third quarter 2021”. [2]

U.S. and Global Economy: While global real GDP growth fell -1.5% and -9.3% sequentially in the first and second quarters of 2020, the global purchasing managers index (PMI) for August 2020 manufacturing and services rebounded sharply to 51.8 and 51.9, with levels above 50 considered expansionary.[3] Particularly Europe and the U.K. had stronger improvements in global growth, suggesting that efforts to contain the virus translated to quicker economic recoveries, which can bode well for their economies heading into 2021 assuming similar efforts continue. For the U.S., third quarter economic growth may be as high as 35% according to Dr. David Kelly, Chief Global Strategist for J.P Morgan Asset Management, but comes after losses of 5% and 31.4% in 2020’s first and second quarters respectively. Fourth quarter growth is likely to decelerate; while 11.4 million jobs were gained over the last few months, this amounts to roughly half of the 22.2 million jobs lost due to measures taken to mitigate the virus spread. U.S. corporate profit growth looks to improve going into 2021, assuming an imminent effective vaccine and agreement on another economic stimulus package.

Impact from the U.S. Elections: Attention is now focused on the potential outcomes of the U.S. election. History suggests that no matter who wins the presidency or which party is in power, both the U.S. economy and stock markets have tended to generate gains. Since 1947, divided government (where the White House and at least one side of Congress were controlled by different political parties) was actually the norm 62% of the time. [4] While a Republican sweep may suggest a continuation of lower taxes for individuals and businesses, a Democratic “blue wave” could actually be an even better outcome for economic growth, according to Chief Economist Jan Hatzius of Goldman Sachs. Unified control by the Democrats could sharply increase the likelihood of a large fiscal stimulus package of around $2 trillion, followed by spending increases on infrastructure, climate, health care, and education. Such spending would likely match tax increases on both high earners and corporations, leading to an increase in economic growth by an estimated 2 to 3 percent. [5] 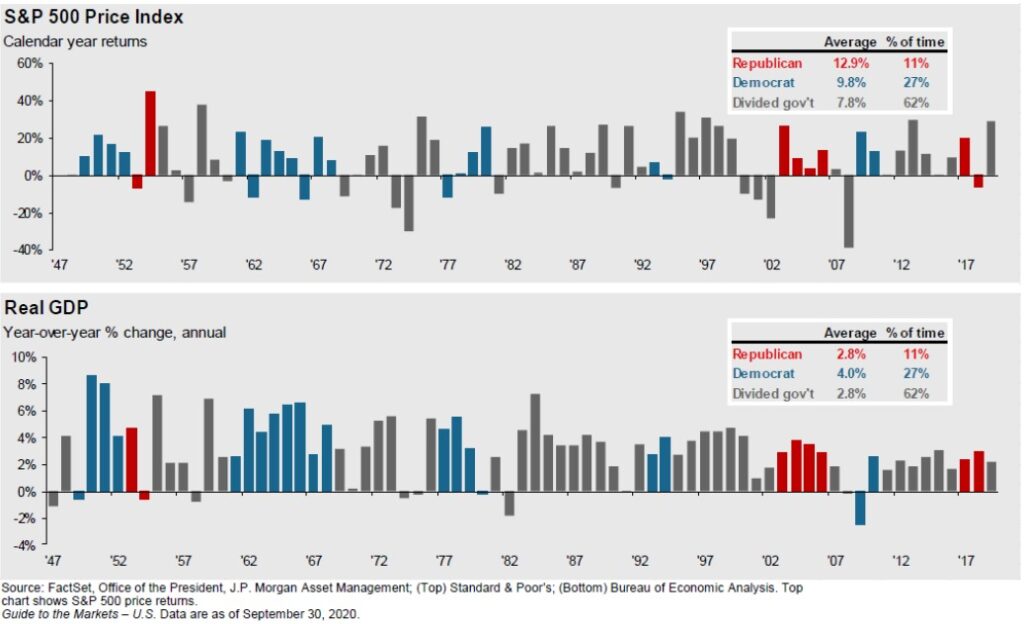 Conclusion: Viral mitigation efforts led to the reopening of many segments of the global economy, helping extend gains in many investment markets. Investors are clearly optimistic that a vaccine may soon be released that could lead to the pandemic end. At the same time, September’s increased stock price volatility may portend more viral challenges as the weather cools in the Northern Hemisphere, which could lead to more economic lockdowns, albeit at a far smaller scale than in the spring. A potentially contested U.S. presidential election is also a risk for increased volatility, particularly if legal uncertainties and challenges extend for months.