Market Returns: While the impact from COVID-19 on the economy was sharp and swift this past spring, so too was the sell-off and subsequent rally across many global investment markets. Although job losses have declined with the reopening of certain portions of the economy, the impact on corporate profitability remains opaque for many sectors. Investors appeared to have looked past either poor data or a lack of data this past quarter to focus more on the prognosis of cures or treatments for the virus which could signal an end to the pandemic’s global economic and human impact. With several virus trials occurring simultaneously around the world and treatments involving both drug and convalescent plasma showing improved speed of recovery, many investors were hopeful that a positive end to the pandemic was coming into sight which significantly lifted stock and bond prices last quarter.

The S&P 500 Index staged a dramatic comeback after dropping 19.6% in the year’s first quarter to surging 20.5% in the second quarter. A bear market – defined as a loss of greater than 20% from peak to trough – was experienced for the S&P 500 in 2020 but it only lasted one month making it the fastest bear market recovery reaching as far back as the 1929 market crash. Non-U.S. stocks experienced price recoveries of their own with both developed market and emerging market stocks rising mid-teens and high teens on a percentage basis last quarter, respectively, as some European and developed Asian countries were able to flatten the virus’ case curve and reopen segments of their economies. Global bonds generated good returns last quarter and the Fed’s participation in the U.S. bond market provided ample support for corporate bonds. Cash generated very low returns last quarter due to the drop of the Federal Funds Rate to near zero.

COVID-19 Update: As of July 9, 2020, the number of global cases of COVID-19 reached over 12.35 million with almost 7.17 million recoveries and over 556,000 fatalities. As the exhibit from J.P. Morgan Asset Management depicts, many regions of the world were able to drop both the case and fatality counts in April and May showing that a combination of shelter-in-place initiatives, aggressive testing, and contact tracing had beneficial effects in helping to blunt the virus. However, moving into June many economies attempted to restart certain segments which lead to increases in case counts particularly in Latin America, Southeast Asia, and North America. Notably, both Europe and North Asia (i.e., Japan, South Korea, China, Hong Kong and Taiwan) have been able to maintain low case counts as the result of continued aggressive measures. Generally, while fatality counts rose, fatality growth rates have improved from those earlier in the spring across most regions. Many believe that this is the result of improved therapies in treating the virus, but also likely due to a larger increase in the case count for younger people which, generally, have had a lower fatality rate.

Extrapolating from this recent data and based on recent spiking case counts in states like Florida, Texas, Arizona, and even California suggests that a second wave (or a continuation of the initial first wave) of increasing positive cases of the virus may be likely in the year’s second half in the U.S. without a concerted effort to reverse some of reopening initiatives or to increase testing and contact tracing. The relative success that both Europe and the Northern Asian countries have had in keeping the case curve low has led to improved mobility in their retail and recreation segments providing improved opportunities for comparatively faster economic recoveries. We believe our globally diversified approach in managing our portfolios should help our portfolios benefit from the potential for non-U.S. developed market investments to outperform. 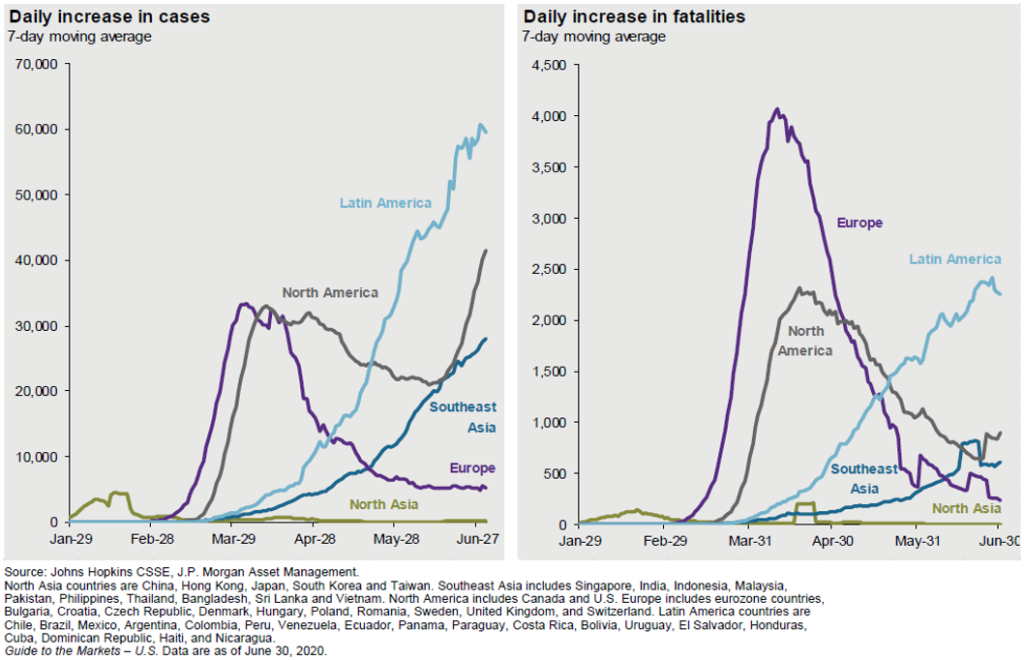 U.S. and Global Economy: The International Monetary Fund downgraded 2020 global growth to -4.9% which is a downward revision based on a worse-than-expected first half of the year and a slower second half of the year due to the impact from COVID-19. For perspective, this forecast would be the largest economic contraction since 1946. While the forecast for 2020 is weak, the forecast for 2021 from the IMF, while revised lower by -0.4%, was 5.4% which, if correct, would be the fastest growth rate since 1964.[1] For the U.S., the IMF forecasts a GDP growth decline of 8% with a recovery in 2021 of positive 4.5 percent. These recoveries are predicated on a belief that both fiscal and monetary stimulus will continue. In the U.S., four packages have been put into effect in 2020 with a fifth probable. These packages, while likely necessary to stave off a collapse in consumer spending from the impact of job and income loss, do come with costs in the form of higher financing costs for the U.S. taxpayer. U.S. debt-to-GDP is now at 97% and expectations are for this to potentially breach 100 percent with continued fiscal and monetary support.

Value and Growth Styles: As previously mentioned, maintaining a value style tilt among our equities has provided a relative performance headwind not only in the previous quarter but for several years since about the end of the global financial crisis of 2008-09. The basis for maintaining a tilt towards value stocks is rooted in academic finance as value has historically delivered excess returns by way of both risk-based and behaviorally driven factors on the part of investors. History has shown that leadership cycles between growth and value can last for extended periods of time with growth having been the dominate style over the last several years. While value has provided excess returns, on average, based on data going as far back as the 1920s, an additional benefit for many of our clients is that value provides additional diversification for those that are exposed to growth industries, such as technology, as Bay Area residents by way of employment or through real estate ownership.

We believe that the underlying factors which underpin the value premium still exist and that the trend will likely reverse at some point as value stocks have become very attractive based on historical valuations. Conditions when value stocks have tended to outperform in the past are when inflation is rising or when economic growth is accelerating – value’s economic cyclicality has actually increased over time. While this currently seems unlikely given the negative economic impact brought forth by COVID-19, a rapid discovery and dissemination of a vaccine could ignite global economic growth quite quickly. Also, the fiscal and monetary stimulus that has been put forth by governments around the world, including the U.S., has the potential for increasing rates of inflation globally. We believe in maintaining a value tilt as a way to hedge exposure to technology, as well as to potentially benefit from a return to global economic expansion which may come quickly and unexpectedly. 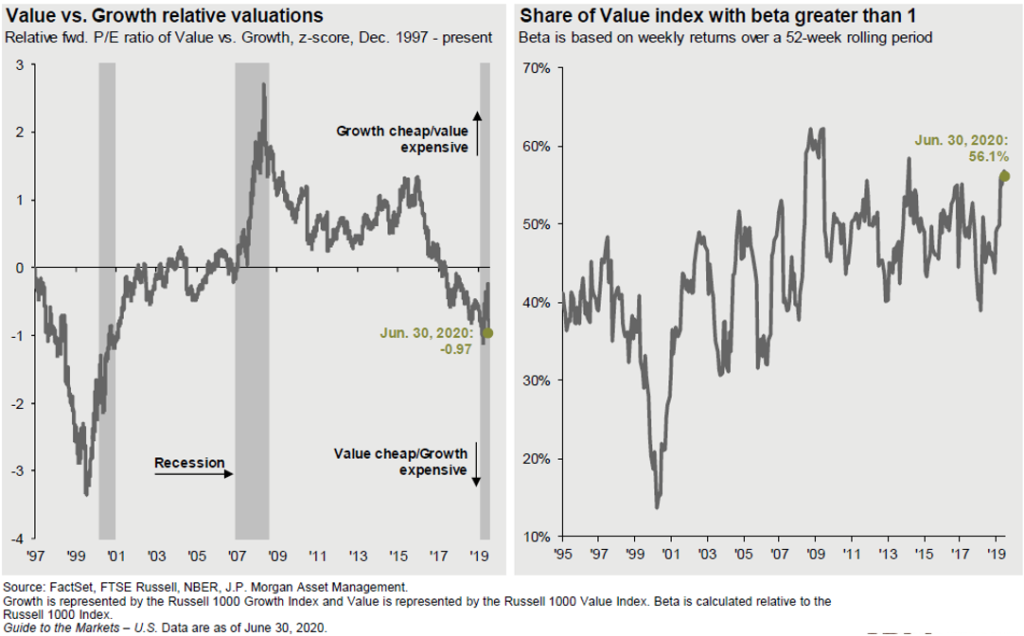 Conclusion: Global markets have experienced a dramatic rebound from the sharp drop in the year’s first quarter which we believe has been predicated on the outlook for the end of the pandemic as opposed to economic fundamentals and valuations. While we are hopeful that the efforts put forth globally to find a vaccine will be successful, investors will likely continue to react to news and data regarding the virus which will continue to lead to elevated volatility. Also, a second wave of increased case counts in the second half of the year, which has been discussed as a possibility, may still likely lead to a spike in volatility if this does in fact transpire.