Market Returns: The second quarter of 2018 was a smoother ride for investors after the volatility spikes experienced in the first quarter. The U.S. economy is on solid footing helped by tax cuts, growing consumer sales, and the drop in the unemployment rate. With very good corporate earnings growth helped by the corporate tax cut, the S&P 500 Index delivered a good 2nd quarter return that outpaced the other major asset classes listed below. The earnings story was more mixed for international equity markets, which combined with concerns regarding a global trade war and a strengthening U.S. dollar, led to losses in non-U.S. stocks for the quarter and year. The Fed lifted interest rates again last quarter based on good U.S. economic data, while the European Central Bank held rates steady (as inflation in Europe has not been a concern). In spite of the rate rise, returns for U.S. bonds were only slightly down, as yields on longer maturity bonds stayed steady or fell, helping bond prices. International bond returns were negatively impacted by the rally in the U.S. Dollar. Cash returns benefitted from continued Fed actions, increasing short-term interest rates with 12-month returns solidly above 1 percent.

Global Trade: As mentioned, the potential for a trade war has impacted recent global market returns. The President of the United States recently escalated this threat by introducing a 10% tariff on a list of $200 billion in Chinese goods (these tariffs still need to be formally reviewed and approved), which exceeds the total value of items China imports from the United States. This highlights the strategy the U.S. may be pursuing when the President claims that the U.S. can win trade wars. The exhibit to the right highlights the relative importance of exports across various countries. For the U.S., exports as a percentage of GDP are relatively low, especially when compared against certain countries in Asia, including China. In particular, the share of U.S. exports to China is comparatively small versus China’s exports to the United States. This presents potential “ammunition” for the U.S., as other countries have comparably more to lose in a trade war. The problem with this potential strategy is that while countries such as China cannot respond with a direct set of dollar-for-dollar tariffs to counter those that may be proposed by the U.S., they have other means at their disposal that can disrupt U.S. exports or slow and/or impede U.S. investments in their respective countries. 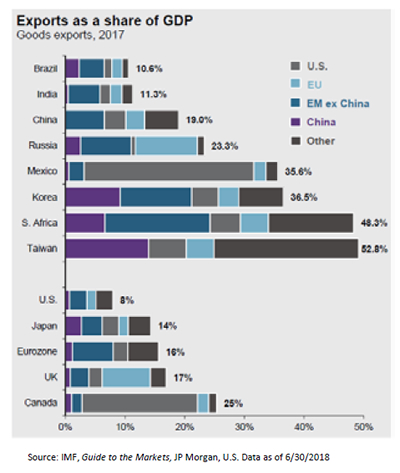 With the prospect of rising import prices for U.S. consumers and manufacturers, how long Americans accept paying higher prices for imports is a critical factor in how long this strategy could work. (At some point U.S. voters could protest this strategy via the ballot box.) With historically low unemployment and steadily rising wages contributing to inflation pressures in the U.S., the addition of higher import prices may be more than American consumers want to bear, and could potentially contribute to additional Federal Reserve rate increases. The combination could result in a decline in consumer confidence and/or lower business investment, which could derail both U.S. economic growth and stock market expansion. At this point, it is still too early to tell how far this may go, as brinksmanship may be the ultimate game played by all involved, but we will continue to monitor trade news as it develops.

Yield Curve: The Fed raised short-term interest rates again last month, and signaled that it may raise rates two more times this year and three more times next year. While short-term rates have increased, which is what the Fed directly controls, longer-term rates have actually declined, leading to a “flattening” of the U.S. yield curve. The differential in yield between longer versus shorter maturity bonds, known as the “spread,” has not been this low since 2007. A low spread may indicate that investors are becoming concerned about future economic growth. In fact, when long-term rates have fallen below short-term rates, known as an “inversion” of the yield curve, this has been a fairly reliable signal (as far back as the mid-1970s) that the start of a recession may be one or two years away. U.S. GDP growth has been healthy this year, and our view on the U.S. economy is generally positive. As with global trade, however, we will continue to monitor the interest rate markets and spreads to help us glean information, and potentially apply some action in our portfolios.

Conclusion: We expect that volatility may increase in the year’s second half as investors continue to contend with global trade and other issues, both rhetorical and actual in nature. With that, U.S. economic fundamentals are solid, which should be supportive for U.S. stocks. Short-term interest rates are likely to continue to rise, and we will be paying close attention to the yield spread and watching for an inversion.

Thank you for your continued trust in us. Enjoy the rest of your summer!